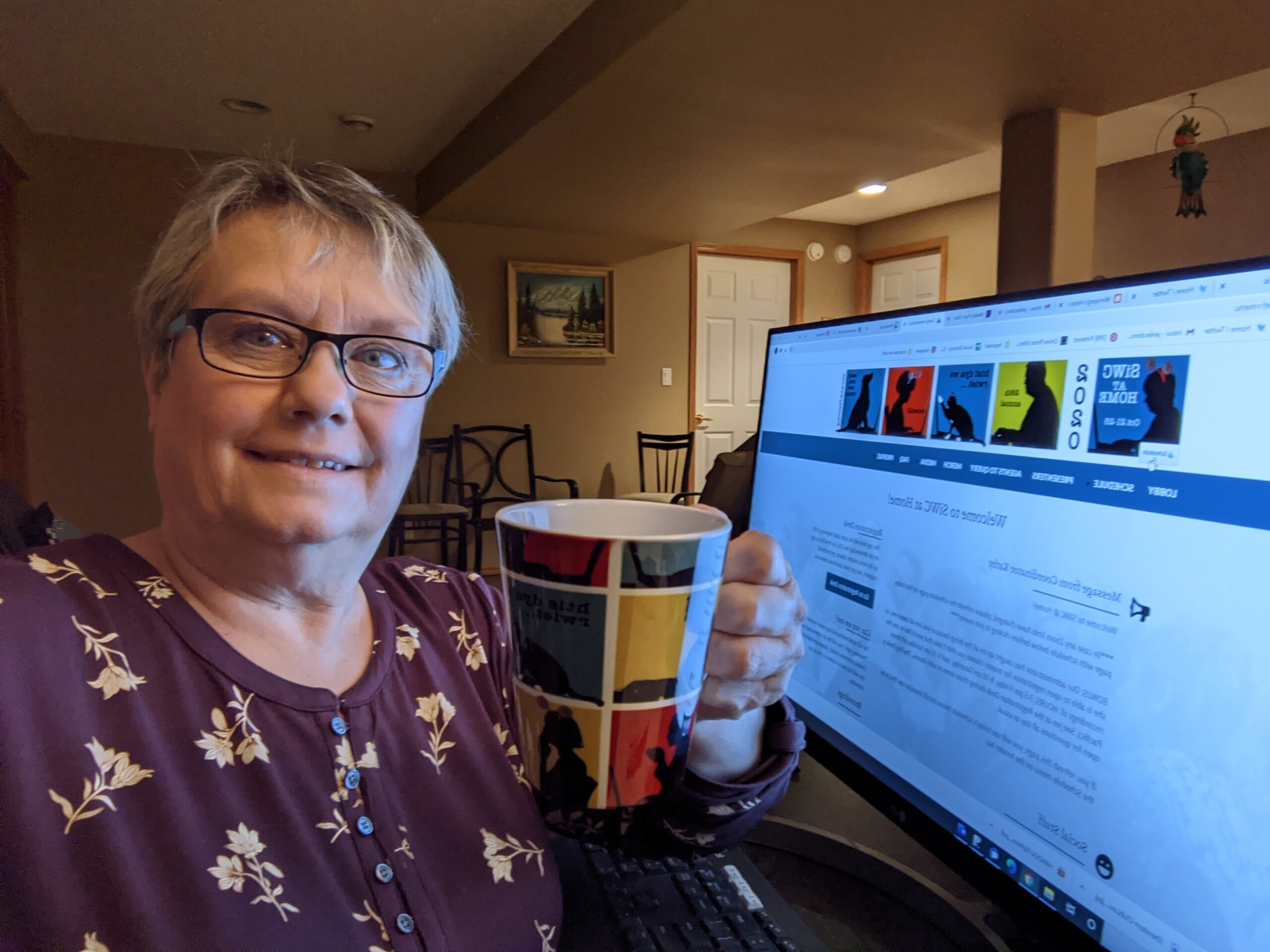 As the world has been dealing with a global pandemic, conference organizers have been faced with decisions to cancel, postpone into the following year, or offer conferences virtually. I’ve attended webinars, workshops, and meetings online that have worked well, but I was skeptical that a virtual conference could be a satisfying experience.

In spite of this skepticism, when I discovered the Surrey International Writers Conference was going virtual in 2020, I decided to give it a try. It is a conference I’d long wanted to attend, but hadn’t yet for a variety of reasons. After an orientation the week before the conference, my skepticism turned to eager anticipation. As the conference unfolded, that was replaced with joy and satisfaction. The virtual format worked. The conference was excellent.

What Is The Surrey International Writers Festival

The Surrey International Writers’ Conference (SiWC), held every October in Surrey, British Columbia, is the most comprehensive professional development conference of its kind in Canada. The conference runs for 3 days with additional partial-day or full-day master classes offered at additional cost in the two days prior to the start of the conference. It started in 1993 as the brainchild of Ed Griffin, Ursula Maxwell-Lewis, Carol Monaghan, and Surrey Continuing Education Principal Elisa Carlson. Ed had attended the Pacific Northwest Writers’ Conference in Washington State and wanted a similar event in Surrey.

Surrey, is located on the British Columbia Lower Mainland on the south side of the Fraser River. It is one of the 21 municipalities that comprise Metro Vancouver. It is situated on the traditional, ancestral, and unceded territories of the Salish Peoples, including the q̓ic̓əy̓ (Katzie), q̓ʷɑ:n̓ƛ̓ən̓ (Kwantlen), and Semiahma (Semiahmoo) land-based nations.

How The Virtual Conference Worked

Attendees were given access to a web site that acted as the hotel hosting the conference. On the schedule pages, links beside each keynote or workshop took you into the room where that session was held. The room was a Zoom session. In most sessions, your video and audio were off. You saw the presenters, who shared their screens if they were talking to a slide presentation. The text chat facility was available. Attendees could share comments with each other and the presenters. A separate Q and A text facility existed for attendees to ask questions of the presenters. The presenters generally stopped at points in their presentation to review and answer the questions. Closed captioning was available at all sessions.

A conference volunteer was present at each session to assist with any technicalities and to assist with moderating the Q and A in cases where the presenter couldn’t easily access that stream while their presentation was live on their screen. If there were handouts associated with a session, those documents were downloadable from another section of the conference website.

A link on the main page of the website took you to the Registration Desk, another Zoom session, which was staffed twelve hours a day to address questions and issues. Another link took you into the Lobby Bar where you had an opportunity to network and video chat with other attendees. The bar was also a Zoom session. In this case your video and audio was on. The bar had a number of smaller breakout Zoom sessions you could join. These breakout “rooms” had names like Table x or Comfy Chairs to simulate the various sections of a bar. Some had four person limits. Others accommodated larger groups. You could see the names of who was already in one of the rooms and join based on who you saw there. Alternatively, you could ask the host of the main bar area for advice on what group to join. A similar facility existed in the Ballroom at lunch time.

A further networking facility was available via the Discord messaging platform. This option was text only (no video or audio). Several content streams were available (e.g. announcements, tech support, conference questions, genre specific, etc.). You could scroll through comments, reply to a comment, or add your own comment. This was also the platform where you could find other conference attendees and direct message them for one-on-one conversations. At the orientation session I attended a week before the conference, I was told to think of the web site as the hotel and meeting rooms and to think of the Discord server as the hallway conversations.

Social events and fun are also part of in-person conference. SiWC included those fun sessions and some of its long-standing traditions, like Shock Theatre where various presenters stage a radio play based on an old horror story written for the event by Vancouver mystery writer Michael Slade and a silly sing-along. These sessions didn’t have quite the same camaraderie as I expect they’d have in person, but they did add lightness and capture the spirit of SiWC. There was also a karaoke evening. I didn’t attend and, therefore, cannot say how that worked out. After two solid conference days and operating in a time zone two hours later than the conference, I was just too tired.

The virtual master classes, available for registration at additional cost, were scheduled on the two days prior to the conference.

Writing Excuses is a podcast for writers by writers. It airs weekly with new episodes appearing on Sunday evenings. Episodes vary from 15 to 25 minutes in length. It started in 2008 and has developed a community of followers. Although the hosts primarily write speculative fiction, many of the podcasts are relevant to other genres as well. For a number of years, Writing Excuses has hosted a workshop and retreat on a Caribbean cruise. The 2020 cruise, slated to happen in September, was cancelled due to COVID-19. Writing Excuses partnered with SiWC to host three days of pre-conference workshops, writing dates, and Q and A sessions. These took place in the three days before the master classes. All events were available at no extra charge to SiWC conference attendees.

The Writing Excuses events were spaced out so the schedule was not as intense as the three days of conference. There were quiet writing rooms where you could sit virtually with other writers as you worked. I only attended a few sessions over these days. I didn’t want to reach burn out or reach overload before the main conference began. I did enjoy a couple of Unlocking Sessions, where writers helped a randomly selected number of participants get past something they were stuck on.

Observations About The Virtual Format

I am very glad I attended this conference. Granted, it was different than attending a conference in person. One attendee who’d been to past conferences said the workshops did not have the “same energy flow as being in the same room together.” Still, she enjoyed the conference. The conference had been organized in a way that recreated the conference feel as much as possible. Text chat allowed you to see and share reactions with one another during workshops. Opportunities for other networking and fun activities were incorporated into the conference format. One past attendee told me “the magic is still there.” Another attendee also commented about the magic of the conference in the chat box at the closing session. The tears welling up in eyes as we ended the conference and said goodbye to each other were anything but virtual.

To learn how to get the most out of your virtual experience, read Tips For Attending A Virtual Conference.