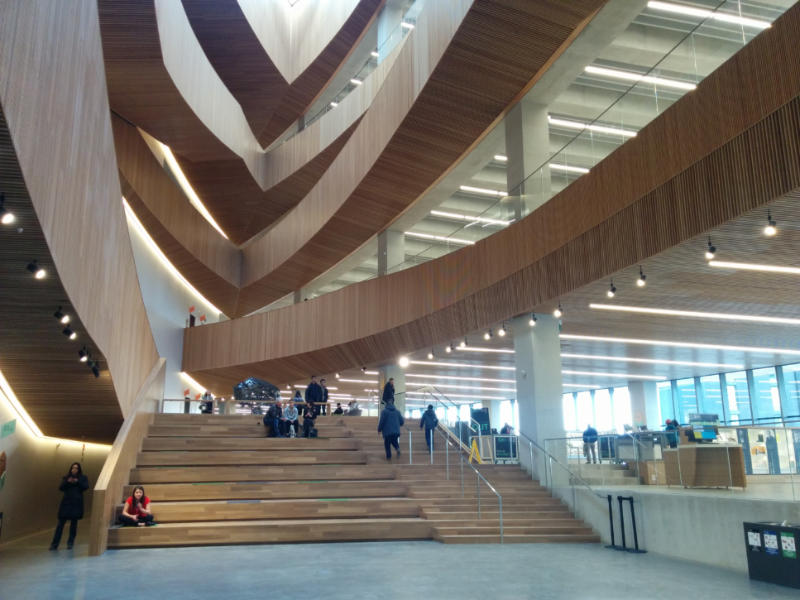 Libraries aren’t generally what comes to mind when thinking about tourist attractions, although the stunning architecture of some libraries does attract attention. An August 2019 New York Times article entitled Where Libraries are Tourist Attractions highlighted several libraries around the world that can be considered tourist attractions. The article mentioned the various amenities libraries are including to attract locals and tourists. These amenities include rooftop gardens, parks, play spaces, theatres, and art galleries.

The Millennium Library in downtown Winnipeg, Manitoba, my home town, has a patio/park area behind it. The park as well as indoor spaces contain pieces of public art.

The emptyful statue by artist Bill Pechet at the edge of the library’s park has became a frequently photographed Winnipeg landmark. A few years ago I met a young couple visiting Winnipeg from a neighouring U.S. state. emptyful was on their list of things to see in Winnipeg.

My sister, who lives on Vancouver Island, told me she likes to visit the library in Ganges on Salt Spring Island when she takes a day trip to Salt Spring because the library is lovely. My sister is also the person who suggested my husband and I visit the Central Library in Seattle when we were in that city. The exterior architecture of the glass and steel building is impressive. The interior is equally impressive. The library’s various programs are arranged across five platforms and four flowing “in between” planes. We rode the escalator up and down to see those platforms and planes.

I’ve visited, albeit briefly, one of the libraries mentioned in the New York Times article. The New Central Library in Calgary, Alberta, Canada, is another architectural highlight. It was designed so the Light Rail Transit could run underneath its lobby. The interior with several levels overlooking a flowing staircase and the lobby area is welcoming and inviting.

It’s not only the building design that’s taken me to public libraries during my travels. I’ve actually used them to access books. When we wintered in Mesa, Arizona, a number of years ago, my husband and I regularly borrowed books from the library. When we spent a month in rural Panama, I paid a visit to the local library seeking information about the plants and trees in the area. They were mostly unfamiliar to me and I wanted to identify them. I must admit this trip was less than successful. The library was small. My Spanish was poor. I looked for picture books, particularly in the children’s section, hoping to spot plants I’d seen on our walks. I thought I could obtain Spanish names I could later google for information in English. Unfortunately I left the library no wiser than when I entered. However, that experience would not deter me from considering libraries in other locations as sources for information in the future.

Libraries are important to communities. Their influence can extend beyond locals to tourists as well.