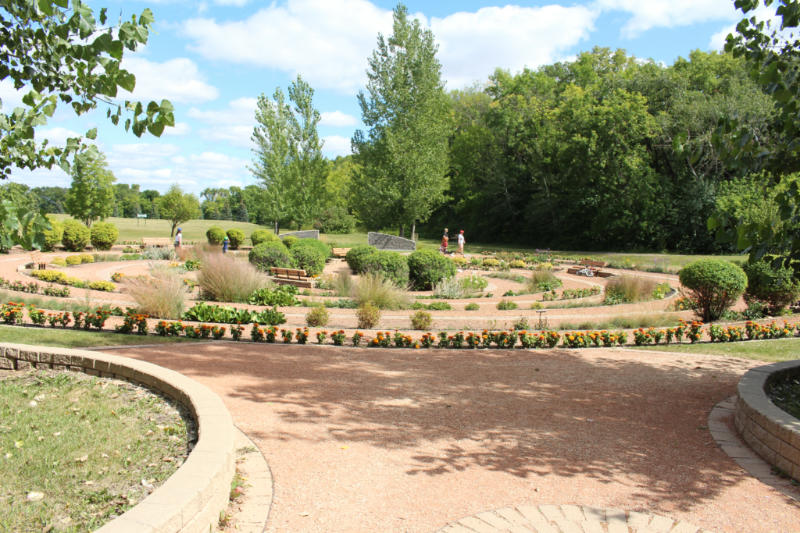 Labyrinth Memorial To An Author

What is a fitting memorial to an author? While the answer to that question will surely vary from author to author, some commonality may be found in a tribute that recognizes the writer’s work.

The City of Winnipeg chose to honour writer Carol Shields by creating a memorial labyrinth. Shields’ 1997 novel Larry’s Party is about an ordinary man, a fumbler, who loves garden mazes and learns how to build them. The Manitoba Labyrinth Network organized a committee to work on the project. In May 2009, the Carol Shields Memorial Labyrinth officially opened in King’s Park, a park in the south end of the city.

Carol Shields was born in 1935 and grew up in the Chicago suburb of Oak Park. She married a Saskatchewan man in 1957 and lived most of her adult life in Winnipeg, Manitoba. She became a Canadian citizen in 1971. She wrote nine novels, three non-fiction books, and several plays and short stories. Her first novel, Small Ceremonies, was published in 1976 when she was forty years old. It won the Canadian Authors Association Award. The Stone Diaries won the 1995 Governor General’s Award and the Pulitzer Prize. Her work, which has been published in 27 languages, centers on women’s lives and domesticity. She was a Professor of English and a mentor to many writers and artists. She was named a Companion to the Order of Canada in 2002. Shields died in 2003.

We often use the terms labyrinth and maze interchangeably. In fact, Carol did that in her book. But there are differences. A labyrinth is a pathway that winds back and forth as it takes you to the centre and spirals you back out again. Labyrinths have only one entrance and one pathway to the centre and back out. Mazes have more than one entrance with dead ends and choices along the way.

Mazes are puzzles to be solved. There are no blind alleys or dead ends in a labyrinth. It is not a puzzle to be solved, but a path of meaning to be explored. Walking a labyrinth can bring joy, relaxation, meditation, healing, self awareness, and spiritual connection. Mazes stimulate the left brain encouraging logical and intellectual skills. Labyrinths activate the right brain releasing intuition and creativity.

Mandalas are circular drawings, often representing the universe. They are used as an aid to meditation and for establishing sacred space. In a labyrinth mandala, you do not just view the image but interact with it. The interaction becomes a walking meditation.

The labyrinth in King’s Park has been designed to reflect Carol’s life. It incorporates many of the hedges and flowers Larry used in his mazes. The daisies, crocuses, and spirea included in the garden are flowers Carol mentioned in her books. The juxtaposition of stone and flowers in the design echo a theme of The Stone Diaries. The Meditation/Healing Garden near the entrance was inspired by Carol’s grace and dignity in facing breast cancer. It contains indigenous herbs that provide benefits of colour and aroma therapy.

Labyrinth walking is an ancient practice used by different faiths for contemplation and prayer. Christians in the middle ages walked labyrinths as substitutes for pilgrimages to the Holy Land. Some of these labyrinths still exist today, the most famous being the one at Chartres Cathedral near Paris, France, built around 1200.

The sign says there is no right way to walk the labyrinth. Some people take a prayer or question with them. The sign encourages people to allow the labyrinth to open those questions or prayers to a myriad of changing possibilities. The path of the labyrinth is a path of personal, psychological and spiritual transformation. We carry our burdens to the centre, reflect or pray there, and walk out lighter.

You can walk the Carol Shields Labyrinth in ten minutes or longer if you choose a slow meditative pace. You may wish to linger in the centre. I first walked the labyrinth in early November 2013. Shrubbery was still small. No flowers were blooming at that time of year. Still, I felt a sense of peace, calm, and quiet stillness as I walked. The curving path pulled me nearer and nearer the centre, but when I thought I’d reached it, the path meandered away from the centre before twisting back toward it, reminding me the path of life is not always straight and direct. In the labyrinth, you continue to follow the path, trusting it will take you to the centre.

I walked the labyrinth again in August 2019. The hedges were more mature and flowers bloomed. Butterflies flitted through the garden. The almost sacred stillness was still there. As I walked nearer to the centre, I became more aware of the sounds around me. The breeze in the trees. Birds singing. The mower on the adjacent lawn space in the park. The hum of highway traffic beyond the park. I was aware of the sounds, but they weren’t intrusive. There was a strong sense of stillness, calm, and grounding at the centre.

I’ve read most of Carol Shields books, but that was many years ago. I enjoyed them. Walking the labyrinth made me wonder what I would think of them if I were to pick up one now and reread it. Would it stand the test of time?

I’ve seen a couple of other labyrinths, but I haven’t had much experience walking labyrinths. Walking the Carol Shields Memorial Labyrinth gave me an appreciation for their meditative qualities. If you’d like to try “walking” a labyrinth with your fingers or your mouse, visit this site.

To get to the Carol Shields Memorial Labyrinth from the second parking lot in King’s Park, walk past the duck pond, either on the paved pathway to the south, or over the red bridges and through the dog park on the north. The labyrinth is at the end of the pond.