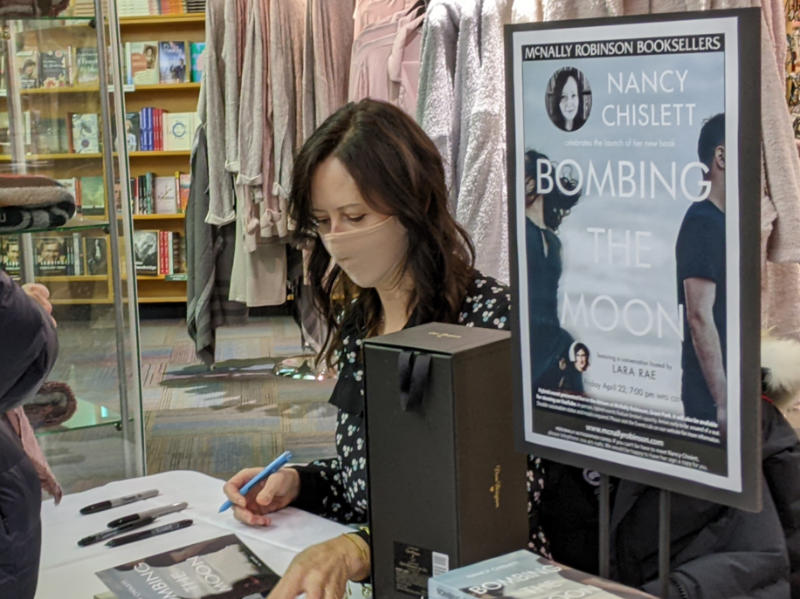 In April, I attended a book launch at a favourite book store, McNally Robinson Booksellers, in my home city of Winnipeg, Manitoba, Canada. It was the first such event I’d attended in person in over two years, but that wasn’t the only thing making the event special. Nancy Chislett, the author launching her first book, has been a member of my writing group for several years. I read early drafts of some of the scenes and talked with Nancy about the story as she developed it. I witnessed Nancy’s dedication and hard work in completing her book, fine-tuning it, and finding a publisher. The launch was indeed a triumphant moment.

Bombing the Moon, published by Now or Never Publishing, follows four members of a Canadian middle-class family dealing with their individual issues and growing further apart after a brazen act of tough love by his grandfather sends their son to Africa.

The blurb on the back of the book says this:

At 24, Devin Rush’s future is unknown and his parents don’t support his dream of becoming a songwriter. Jobless and antagonistic, Devin feels like the world is rigged against him, and his parents, wondering if he’ll ever man up, fear he’ll depend on them for life. But when Devin’s grandfather gives him a one-way ticket to Nairobi, Kenya, Devin believes it’s his family that wants him gone; outraged and seeing no alternative, he leaves abruptly, and is thrust into a world unlike any he’s ever seen.

Stunned by his sudden departure, Devin’s parents and sister are pushed further afield of the control they crave. Resentment and guilt nudge his parent’s marriage closer to collapse, and abandonment triggers his sister’s long-buried shame. Meanwhile, when Nairobi’s election approaches and tensions erupt, Devin is faced with choices and consequences that are all too real. Beautifully written, often subversive and darkly funny, Bombing the Moon is an honest, intimate exploration of the promises and limitations of tough love.

The story is told in four voices, those of Devin, his sister, his father, and his mother. Writing a story from the perspective of multiple persons can be tricky, but each voice in Bombing the Moon is unique. At the launch, Nancy, who plays classical piano, talked about envisioning a musical perspective in the way the characters spoke with particular rhythms and flows.

The characters became very real to me and the other members of my writing group as we discussed them with Nancy. Yet, I learned more about them as I read the book. I was absorbed by the way their stories unfolded and eager to read on to find out more. Nancy speaks about writing from the point of view of multiple characters and weaving in flashbacks in this blog post on her web site.

It was also interesting to hear Nancy answer a variety of questions at the launch. Again, there was a mix of things I knew and things new to me in her responses.

Nancy spoke about the origin of the title at the launch. Bombing the moon refers to a top-secret plan developed by the United States Air Force to nuke the moon in 1957. At the height of the Cold War, the Soviet Union took the lead in the space race with the launch of Sputnik 1 in October 1957. In order to prove to the world it wasn’t losing the space race, the United States initiated Project A119 with the help of some of the country’s top scientists. Fortunately, the project was eventually cancelled. It had no specific purpose other than being a show of force. Nancy finds that show of force analogous to aspects of tough love.

Nancy has now started work on her second book and I am enjoying seeing some of the early parts of that in my writing group.