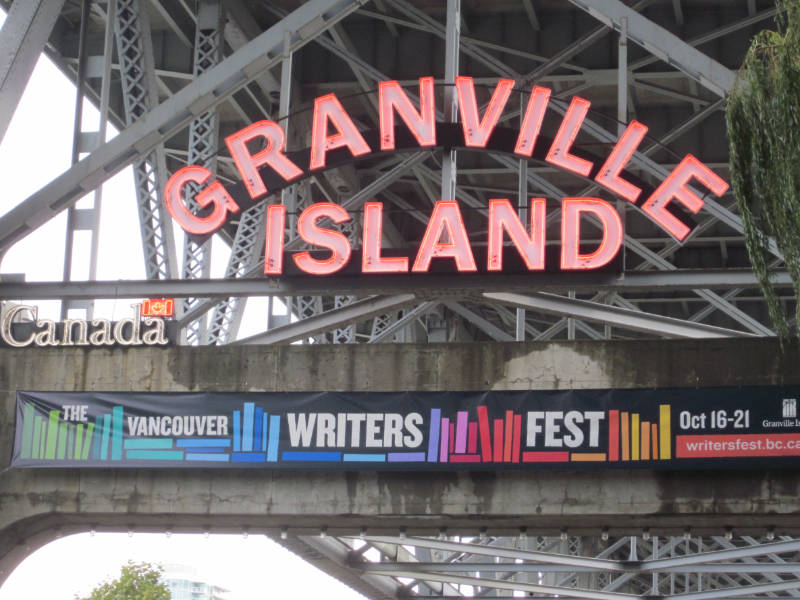 Writers’ festivals, sometimes also called book festivals or literary festivals, are events, often spread across several days, which feature writer readings, interviews, and discussions. Sometimes a workshop or two on some aspect of writing will be part of the schedule. Many cities across the world feature writers’ festivals on an annual basis. Writers’ festivals offer opportunities for writers to read from and showcase their new works. They offer opportunities for readers to discover new writers and new works from favourite writers. The festivals can also be places for writers to learn from other writers and to find a connection with another writer’s perspective or process.

I gleaned assorted fragments of writing wisdom from three festivals: the 2012 and 2014 Thin Air: Winnipeg International Writers Festival and  the 2012 Vancouver Writers Fest.

Writers’ reasons for choosing a particular time period in which to set a story vary. A story set in a time period from the past often requires research to sound authentic. Some writers love research, others avoid it.

Alison Preston wanted an environment in which there were no hand-held devices, a time when children wandered off on their own and had lots of freedom. She said her teen years were still very vivid for her. For those reasons, she set her latest book in 1964. She could write about that time from memory without the need for research.

Similarly, Miriam Toews set A Complicated Kindness in 1984 at a time when she was 16 years old, a time she could remember, and therefore avoid research.Audrey Thomas’s new book Local Customs is about four people who lived in the early 1800s. Research was necessary. Audrey likes doing the research, but likened it to “trying the eat just one peanut, next thing you know it’s three hours later.”

I usually enjoy doing research, but it can easily take you off on tangents that use up a lot of time. I do not have the same vivid memories of my youth as Miriam and Alison seem to have. I might need to do research for a story set during my teen or childhood years. I’m reminded of something else said in one afternoon book chat, “What we remember isn’t what really happened.”

I’ve found it encouraging over the years to hear accomplished writers also reach points where they don’t know what to do next or where the story is going. But they do find ways to continue. Hearing about what works for them gives me more options for finding something that works for me.

Alison Preston doesn’t plot out a story, but lets it flow from the first sentence. When she gets stuck, she will go back and regroup, and possibly branch off in one of the other directions the story can go. John McFeteridge doesn’t go back. He finds it important to finish the first draft before going back. But he suggests falling back on the theme when one is unsure where to take the story next. How does the character change or what does she learn?

A challenge for writers is creating dialogue in which characters have a distinct voice. John McFeteridge suggested writers shouldn’t worry about this. He’s read passages where the characters’ voices sounded the same and it didn’t matter. And sometimes, when characters’ voices are too obviously different, the effect is jarring. He suggests writers concentrate on making the character sound like himself or herself, that the voice be true to the character.

Ultimately it is the reader who brings the story to life. And the reader may see things that the writer had not intended. For example, Cordelia Strube talked about a reviewer finding symbolism in one of her books she had not intentionally put there. I’ve heard of this happening to other writers.

Anne Perry and her biographer, Joanne Drayton. Joanne talked about her favourite Anne Perry character, William Monk. William Monk is a detective, a former policeman, living in Victorian England. Following an accident, he developed amnesia and cannot remember his past, although glimpses flash through now and again. Monk fascinated Joanne because of the whole idea of losing your back story. Anne Perry said that wasn’t the theme behind Monk at all. She said we all make mistakes, but how we deal with that differentiates us. William Monk had not been a very nice man in his past. When he is confronted with evidence of what he did, he knows he must have done it but he doesn’t know why. He starts to look for the why in others.

The possibility of readers seeing and imagining things in my story I hadn’t consciously planned excites me. But it also makes me examine my writing more closely from a reader’s perspective. Have I included enough detail? Is it clear? Have I left enough to the imagination?

Sometimes festival events invoked feelings of woeful inadequacy. After listening to beautiful words and exquisitely crafted stories, I questioned what was I thinking, thinking I could write. Other times I felt encouraged. This often occurred when the writers talked about their writing process. Each one approached writing differently.

Anne Perry creates a detailed outline of her plot, each scene identified, before she starts writing. Some other writers said they may have an idea of what they want to write, but don’t know where the story is going. They figure it out as they write. Nancy Richler and Emily St. John Mandel write everyday. Marjorie Celona worked on her novel Y every second day, writing up to twelve hours in the day. Nancy Richler takes her laptop to coffee houses. Marjorie Celona writes propped up on her bed, clad in workout clothes, water bottle at one side, energy bar at the other. In other words, no one set process or routine. It means that whatever works for me is right. I have to find my own way.

Where did the writers say their ideas and inspirations came from? The stories often started with something in real life that they twisted and shaped into something different. They watch and listen to people. One writer said she rides the bus with her iPod earbuds in her ears, but the iPod turned off so she can inconspicuously eavesdrop. I can’t remember now which writer said that but I could relate. I am a little more conspicuous. My daughter often nudges me or gives me a chastising look when my eavesdropping on strangers’ conversations becomes too obvious.

Audrey Thomas first heard the story of Letita Landon almost 50 years ago and it haunted her for years until she wrote Local Customs.

Miriam Toews uses her own life and emotions in her books. She talked of writing as a way to “examine our obsessions.”

Denise Roig talked about needing to be slightly off-balance to write. Travel and new places do that for her. That comment reminded me of an observation John McFeteridge made earlier in the week when he talked about the writer’s eye in relation to location or setting. When we write about the place we live, especially if we have been born and raised there, we need to find a way to get a stranger’s perspective. We often cannot see what is unique about our home because we are too used to it.

I don’t remember who during the week said “Art comes from mysterious places, one needs to be curious”, but it struck enough of a chord with me to write it down in my notebook.

In reality this would never happen. A high official would never tell the truth. ∼Beijing author Chan Koonchung talking about his book The Fat Years.